The story of Project Spark starts with the battle between the Creation Well (home of all Sparks) and the Void (home of a deadly virus and its corrupt forces). An ancient world-devouring virus threatens to destroy the Universe, so a tiny, but powerful Spark leaves the Creation Well and travels with a mission to recruit an army of special personalities known as Champions. Together they will confront the virus, each with his/her own special traits/abilities. Their mission is to rescue the Sparks that are meant to be siphoned from the virus, while revealing ancient Kode Glyphs (made from an ancient race - the Kodians).

The overall map of Kora so far consists of four major islands: 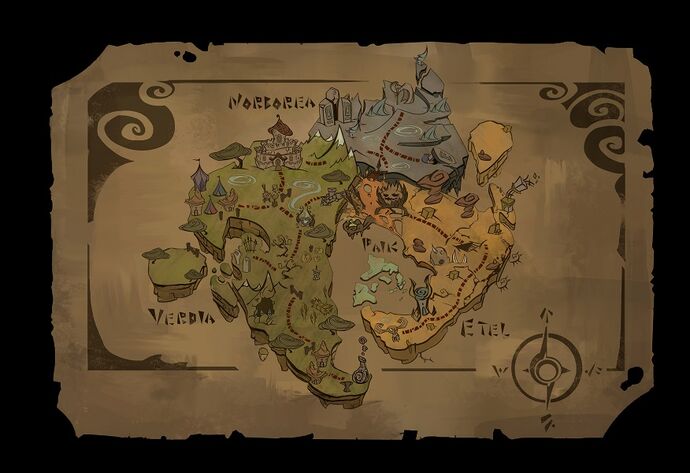 The first and most common theme for Project Spark, Verdia is inhabited by squirrels and consists mainly of Woodlands.

This island is found in the North of Kora and it is inhabited by snow foxes and yetis to the north. The theme of Norborea is Arctic. It is also said that dwarves live in Norborea.

Etel is the island to the right and it is mainly inhabited by Cotton Tails. The theme of Etel is desert and there is a lot of mystery concerning its specific areas.

This island is found in the middle of the map, in-between the first three. The theme of this island is swamps. The only information from the island so far will be found in the upcoming DLC Pack "Noxious Bogs".

The area consists of:

Champions are pruned from seemingly everyday people that have an inherent skill, power, or trait and are often brave, noble, or in some way a bastion of good and hope. Champions are often looking to save or protect their very world and remain committed to defeating the Void once its true purpose comes to light.

While Sparks often develop strong emotional bonds with their Champions, the very act of becoming a Champion occurs when a Spark melds with the Champion. This act brings out their natural powers, can bring forth additional powers, and allows the Spark and Champion to intuitively work together. This also allows Sparks and Kodite to become visible by these chosen Champions. These powers tend to grow in power or reveal themselves as the Champions themselves becomes more experienced in their new role. Ultimately, it is unpredictable as to who and when Spark will anoint a new Champion. It is unknown exactly what a Spark needs to see in a candidate and why they choose who they do.

Avalon was a quiet girl raised in a remote village near the swampland border of Paik. She had a passion for the outdoors, foraging and caring for the local critters. But as a teen, she began hearing mysterious whispers; voices that would one day set her on a path of great destiny.

One fateful evening, Avalon was on a hike and strayed to the forbidden border where she happened upon a rogue group of goblins. As the creatures gave chase, voices guided her to a secret cave within a massive tree. Surprisingly, the tree's limbs sealed the entrance and locked out the goblins!

Voices led Avalon to a majestic wellspring filled with magic wisps, earthly minerals, and tiny critters. Several figures emerged out of the surroundings; shape-shifting from wisps, plants, and animals into Elder Druids. The Elders guided Avalon to 'commune' with the wellspring, and as a result, her inherent Druid powers revealed themselves! She returned to the entrance where the goblins waited in ambush. With her new found skills, Avalon subdued and defeated the group.

The following years saw Avalon horning her skills at the Druid Sanctuary. Then, on a particularly cold winter day, the location of the Sanctuary was compromised by a goblin horde. Although the Druids suffered some loses, Avalon was instrumental to repelling the onslaught. Rhis act solidified Avalon's potential to Spark and she was apointed a champion!

The Druid is a mid-ranged class designed to “remove energy” from their enemies at range with earthly powers. The Druid can then use their shape shifting wisp powers to convert the energy into heals, damage attacks, or a defensive “turret” plant that fires razor sharp barbs. Strong opponents up close and powerful ranged opponents tend to challenge the Druid.

•Removes energy from foes and gains power chambers which can be converted to special attacks.

•Ability to create a thorn tree to act as a defend turret.

Though raised to value strength like all goblins, Karlsnor was unusually noble. Though a skilled fighter, he refused to attack anyone weaker than him. The clan leader, mistaking Karlsnor’s honor for pretension, challenged him to a duel. Karlsnor was fast and focused, and the clan leader could not land a single blow and ultimately collapsed in exhaustion. As Karlsnor helped him back up, the spiteful clan leader drew a dagger and stabbed him. Karlsnor felt a furious rage bubbling up from inside him. He felt himself changing, losing control, and suddenly he was standing over the body of the mortally wounded clan leader. Karlsnor’s rage had unlocked something deep inside him: the rare natural talent of a goblin Berzerker to change form in the heat of battle. His clanmates were in awe of his abilities, but Karlsnor felt there was nothing honorable about how he had lost control. Vowing to truly earn the respect of his clan, he left his village, saying he would return only when he fully understood his own power.

A hardworking farm boy, Haakon longed to protect the kingdom as a Knight. Haakon was a simple farmer until a fateful encounter with a ferocius troll who attacked his homestead. Brave and full of guile, maneuvered the fiend into the forest, where he discovered a legendary sword and shield. Wounded and weak, he swung at the troll and saw the spirit of a Royal Knight emerge from the sword and strike down the monster.

News of Haakon's deed spread to the King who summoned this "Hawk" to his castle. And when the King noticed Haakon's sword and shield, he explained that they once belonged to the fallen Royal Knight Sigurd. Haakon confessed that it was the spirit of Sir Sigurd that helped him overcome the troll.

Intrigued by his story and certain that there was a mystical air surrounding the farmer, the King knighted Haakon and consigned him to the Knight's Training Camp for training.

Years later, Sir Hawk - along with the help of his trusted spirtual companion, Sir Sigurd - saved a caravan of travelers from a horde of goblin raiders. Spark, having observed Sir Hawk for some time was convinced of his potential deeds and apointed him a champion.

The Defender thrives when surrounded due to their superior defensive counter attacks and sword training allowing them the chance to spawn “ghost swords.” Fast damaging foes and high damage ranged opponents tend to challenge the Defender. Channeling the spirit of Sir Sigurd makes Haakon a well-rounded and formidable opponent.

•Summons the spirit of Sigurd

Scarlet was a strong-willed and solitary girl who would rather practice archery alone in the forest than spend time in the company of others. After thwarting a terrible attack by a marauding group of bandits on her village, Scarlet vowed to protect those unable to protect themselves. Rumors tell tales of the shadowy figure that roams the Verdia woodlands and only appears to protect those in trouble.

•Kaltrop traps that can be converted to charge shots

Community content is available under CC-BY-SA unless otherwise noted.
Advertisement